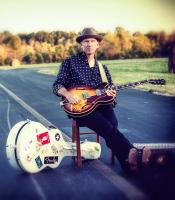 I am a multi-instrumentalist / singer with over 35 years of professional touring and studio experience. I know hundreds of songs off-book, can read well and love to play in a variety of styles and situations. I earned a Diploma of Jazz at Vancouver Island University in 1989. Currently, and for the past 7 years I have been the lead guitarist for the legendary Ian Tyson. I am new in Nashville and I am looking for any opportunities to start playing music close to home. I enjoy country, classic rock, folk, blues, jazz and bluegrass