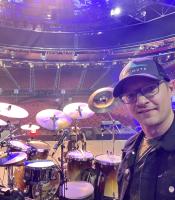 Knows how to play quiet - even with sticks!

Has professional level home recording studio with drums set up and ready to record in an instant.

Nashville drummer Brian Czach (pronounced "Zack") just got off the road with country music star Tracy Lawrence, and is a band member of Mannheim Steamroller. Czach has devoted his life to being as creative and versatile anyone with a pair of sticks could hope to be. Born in Schenectady NY, he has experience playing in every imaginable musical setting, from the filthiest rock club, to the swankiest hotels, film & TV scores, artist sessions, tours, dance bands, and live theater, Brian’s musical experience is vastly extensive.

Brian aspires to become an in demand session/touring drummer. He has played drums and recorded with artists of all kind including The Spot Men (Dave Roe & Kenny Vaughan), Rick Monroe, Guthrie Trapp, Angela Easley, Stacy Antonel, Dalton Gray, Amelia Eisenhauer Band, Operation: Song, and Brynn Marie, and many others, all while playing 3x/week at the historic Skulls Rainbow Room. In addition, Brian created and leads a tribute to jazz legend Miles Davis called MILEStones, which seeks to pay homage to the jazz legend by playing the exact arrangements he recorded utilizing the quintet format that Miles led from the 1950's and 60's. Working out of his home studio in Mt. Juliet, TN, Brian provides drum tracks via online recording sessions, drum lessons, songwriting production, arranging, and programming for clients around the world.

"Unraveling The Wilburys" Tribute to the Traveling Wilburys (2018)

plus tons and tons of demos, and songs for film/TV placement.