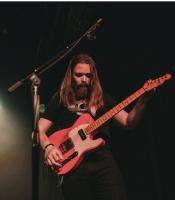 Colin Poulton is a professional guitarist living in Nashville, Tennessee. Upon moving to Nashville in 2008, Colin attended Belmont University, where he honed in his music theory and guitar chops while also playing original music and for artists in the music program. He spent time playing drums and writing for the doom metal group Clorange, who released their record Instinct on PRC Records, while also playing guitar and writing with the instrumental progressive rock outfit Montezuma Fire Machine, who independently released a self-titled EP and a full length entitled Astolabe. He also contributed guitar to the funk duo Funkonauts album Funkonauts and Friends, which led to him joining the group for numerous live performances playing guitar.

Colin joined the Chris Weaver Band in 2013, appearing on the live DVD/CD Live in Brazil, which features various sertaneja artists such as Fernando e Sorocaba and Marcos e Belutti, as well as performing at private functions and corporate events for companies like Sonic and Petco, and live sporting events like the Indy 500, the Kentucky Derby, and the World Cup of Hockey.

These days, he stays busy as a freelance musician playing over 200 shows a year since 2013 ranging from festival stages, wedding halls, dive bars, and Lower Broadway honky tonks including opening for acts like Snarky Puppy, Earth Wind & Fire, Heart, Blackberry Smoke, and Roots of a Rebellion as well as live performances with David Ellefson of Megadeth and Kris Myers of Umphrey's McGee. He credits his success to being a musical polyglot who is always listening to and interacting with the other players on the stage. Colin is also a writer that enjoys writing about guitar gear, music theory, live shows, his own experiences, and anything else under the umbrella of music as well as doing transcriptions. His writing has been featured by Native Magazine and Behind the Setlist. Colin endorses and fully enjoys Avedissian Pickups, Backbone Guitar Products, Black 35 Guitars, and Elixir Strings.

“I’ve had the opportunity to tour and record with Colin on multiple projects over the past 4 years. He has a superb work ethic and is a chameleon of so many styles on guitar. He’s always got his fellow musicians’ backs and is a joy to be around” – Jason Friedman, Keyboard player (Chris Weaver Band, Bo Bice, Corbette Jackson) and Producer

“Not only is Colin a well-rounded musician, but also a phenomenal teacher. Working with him in lessons is a true testament to his musicianship as well as his breadth of musical knowledge. He caters not only to what you need to know and practice, but also what you want to learn. This creates a nurturing environment that allows you to learn at your own pace, while simultaneously encouraging you to reach your full potential as a musician. He is kind, smart, supportive, and perceptive, and it is a treasure and inspiration to have him teach me.” – Mary Hull, Guitar and Ear Training student

“Colin graciously took the time to talk to my Rock Band students, answer questions they had, and was able to give them real world advice about working as a musician. My students are largely from families of limited means, and to hear about what it takes to make it as a professional was a very big deal to them. Incidentally, much of what he had to say also aligned with my own teaching philosophies, reinforcing the importance of work ethic & the importance of understanding basic musical concepts. He detailed a realistic as well as hopeful path to working as a musician, and my kids loved hearing from him. I hope we can virtually “bring him in” next year, as well!” – Emily Langerholc, Teacher