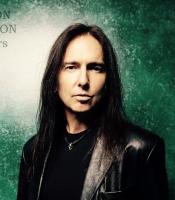 Damon Johnson has been a triple threat…guitarist, singer, songwriter…since his early days of fronting Brother Cane and scoring three #1 singles at rock radio in the 90s (“Got No Shame”, “And Fools Shine On”, and “I Lie In The Bed I Make”).  Honing his craft with relentless touring and support slots with the likes of Van Halen, Aerosmith and Robert Plant, Johnson has also co-written songs recorded by Stevie Nicks, Carlos Santana w/Steven Tyler, and Sammy Hagar. He toured the world for several years as guitarist for Alice Cooper, and in 2011 he joined legendary Irish rock group, Thin Lizzy. In 2013 the core of that band would morph into a new group, Black Star Riders, and have released three well-received albums of which Johnson co-wrote all the songs.

His much-anticipated full length solo album, ‘Memoirs Of An Uprising’, is set to be released worldwide March 8 of 2019.