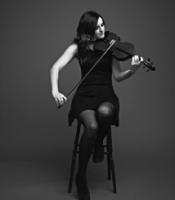 The Lone Bellow "May You Be Well" live at Oceanway, Nashville

Eleonore is an in-demand studio and live performance violinist living in Nashville, TN. She has recorded with artists such as Margo Price, Meghan Trainor, Mavis Staples, Lauryn Hill, Mikky Ekko and Langhorne Slim. Her strings have been featured on multiple TV placements including Grey's Anatomy, Parenthood, Private Practice, The Vampire Diaries and Pretty Little Liars. She has also recorded for CMT's Nashville and has appeared in front of the lens on several episodes .

Eleonore's live performances span a wide range of genres; she has shared the stage with Lorde, Tyler Childers, The WHO, Gillian Welch & Dave Rawlings, Keith Urban, Michael Buble, Judah and The Lion, The Lone Bellow and Trampled By Turtles.

In addition to recording and performing, Eleonore has arranged strings for albums, film and live performances, including Caitlyn Smith's debut record, Starfire, the theme song for Brett Haley's film I'll See You In My Dreams, written by Keegan DeWitt,  Matthew Perryman Jone's "Land of the Living" (the title track now featured in Manchester By The Sea), and Leeland's Grammy- nominated The Great Awakening.

For a myriad of performances and sessions, Eleonore serves as a contractor as well as a player. Some of her past contracting work includes putting together a 10-piece violin section for David Rawlings at historic Woodland Studios,  strings and horns for The Lone Bellow's 2016 Americana Awards performance and the string section for Eric Church at CMT's Artist of The Year Awards. For a complete list of credits, please visit her website.