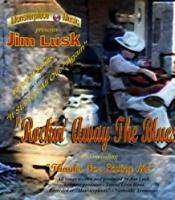 I write the songs!

In 2011, Atlanta Country Music Hall of Fame member Jim Lusk released his first album as an independent recording artist. This album resulted in Jim receiving the 2011 Atlanta Society Of Entertainers award for RECORDING ARTIST OF THE YEAR!!!! (Jim was also awarded the 2010 Atlanta Society of Entertainers award as “Songwriter of the Year.) The title song, “Rockin’ Away The Blues” reached the TOP TEN on CMG’s Indie Music Network, and two other songs from the album are currently included in the CMG TOP 100. Jim’s music is available at http://www.cdbaby.com/cd/jimlusk, http://www.amazon.com/s/ref=nb_sb_noss?url=search-alias%3Daps&field-keyw..., also on iTunes at http://itunes.apple.com/us/album/rockin-away-the-blues/id428035803 , and others. A career HIGHLIGHT!!!!! In 2009, Jim received the honor of being inducted into The Atlanta Country Music Hall of Fame with their highest award “The Dedication Award,” where the entire evening and awards ceremony was dedicated to Jim Lusk and his late wife, Laverne Layne. The Atlanta Country Music Hall of Fame includes a “who’s who” list of artists such as Jack Greene, Bill Anderson, Brenda Lee, Ray Stevens, Pete Drake, Jerry Reed, Vern Gosdin, Martha Carson, Joe South, Junior Samples, Chet Atkins, Faron Young, Johnny Paycheck, and many others. A few other highlights of award winning composer/producer Jim Lusk - BMI Songwriter since 1969 - some of Jim's songs include: "Liquid Hurt" which was published by Pete Drake's Window Music, recorded and released on Jim's Galaxie Records label. This song garnered seventeen (17) "pick hits" on radio stations across the South, was a chart topper on Georgia, South Carolina, North Carolina, Mississippi, and Alabama radio station, and made number two on the WTJH Radio charts in Atlanta, and hit the top 40 chart on Atlanta's WPLO. “Liquid Hurt” has also been recorded and released by two other artists. Jim followed this with his hit "I Need Loving Tonight" penned with his late wife, Laverne Layne. This song was recorded at Monument Studios in Nashville, Tennessee and was the maiden release that started Skylite Country Records (produced by Little Jimmy Dempsey.) It charted in several locations including reaching number one in Kissimmee, Florida, New Mexico, South Carolina, Tennessee, and launched Jim and Laverne's career. In the mid-70's, Jim was asked to team up with former Elvis Presley writer, Shirl Milete (“Life,” “My Little Friend,” “It's Your Baby You Rock It”) and Grammy winning composer Gary S. Paxton (Hollywood Argyles "Alley Oop" – “Monster Mash,” “He Was There All The Time,” “Sensuous Woman,” “Honeymoon Feeling,” etc.) This partnership led to a string of hits which included Vern Gosdin's nationwide number three song "It Started All Over Again,” (The Best Of Vern Gosdin on Warner Brothers Records.) This song was also recorded by David Houston and reached the top forty Billboard Charts nationwide, as well as being included in David Houston's Greatest Hits album. The Four Guys recorded "I Remember" (which was their show theme for over ten years,) "Counterfeit Cowboy" has been recorded by a host of artists, including Dorsey Burnett of “Tall Oak Tree” fame, as well as Gary S. Paxton, R. W. Blackwood, Jay Lee Webb (Loretta Lynn and Crystal Gayle’s brother,) and others. Australia's top vocal group, The LeGardes recorded Jim's song "I Can Almost Touch The Feeling," which reached the top of the Australian Music Charts. This song was in Graceland awaiting a recording by Elvis at the time of his death. In 2010 Jim wrote and co-produced the first release by the original Hollywood Argyles since the early 60's - "The Vote 'Em Out Boogie" released on Skitzopax CD’s and Videos, and is currently being played nationwide. He continues to write and produce with Gary Paxton, having co-produced and written songs on Gary’s “Grandpa Rock, Volume 1” album which contained over 51 years of Gary Paxton music. Jim and Gary are currently completing “Grandpa Rock, Volume 2” which will contain many more past hits from major artists, and is scheduled to be released on Jim and Gary’s Skitzopax CD’s & Videos later in 2012. In 2010 Jim wrote, along with Teresa Lusk, and Roy August of "Fancy Free" fame (Oak Ridge Boys - over two million plays) a song entitled "Diesel Smoke and Lace" which is currently being held by a major recording artists for possible recording. This is their tribute song to all the lady truckers on the road. Today, Jim continues to entertain at music venues throughout the Southeast along with his band “The Counterfeit Cowboys.” Jim always has, and always will believe music is meant to be played “FOR the people” instead of “TO the people!” be sure and visit Jim’s websites - www.JimLusk.Com www.JimJimMusic.com www.ShalaKedonMusic.com