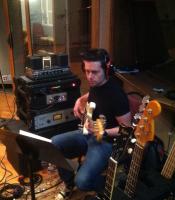 Luis Espaillat is a multi-faceted bassist and musician whose career has spanned many genres and taken him around the world.  His unique sound can be heard in all forms of media from shows on network television such as Smallville and King Of The Hill, major motion pictures including S.W.A.T. and American Wedding and even video games including Need For Speed: Hot Pursuit 2 and Project Gotham Racing.

In the studio, Luis can be heard in various genres from the modern country sounds of Bailey Zimmerman’s 15 million stream and counting hit, “Never Comin’ Home,” country legends like Michael Martin Murphey to contemporary country, Juno award nominees Autumn Hill, the #1 Country Christian song, “I’m There” by Buddy Jewell, TV commercials for the likes of Ford Trucks and Zaxby’s to the Billboard Top 20 hard rock sounds of Eve To Adam.  His sense and respect for the art of the song itself has made him in demand for many songwriters and producers not only in Nashville, but also Los Angeles and New York City.  On the stage, Luis has performed with country stars Jon Pardi, Jo Dee Messina, Ty Herndon, Lee Greenwood, Trace Adkins, Jamie O'Neal, Jimmy Wayne, Lindsay Ell, and Pam Tillis, legendary singer/songwriters such as Gavin DeGraw and Jim Messina, rockers such as Tom Keifer, Tantric, Tony Harnell and Bo Bice, progressive instrumentalist like Johnny Hiland, and even artists that defy normal convention such as country rapper Colt Ford, just to name a few.

A graduate of Berklee College Of Music, Luis also conducts clinics and master classes on the world of studio recording, touring and of course, bass.