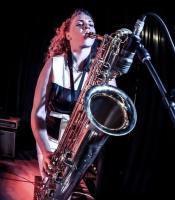 I am a multi-instrumentalist & composer. My first and main instrument is saxophone. I have a preference towards Baritone Sax but I do play alto and tenor as well. I have an original album out called "To The Ghost of Mary Rodgers..." I wrote and arranged all the songs. I do original shows where I sing and play piano. I also play accordion, bass clarinet, and ukulele.

Mary Rodgers is a Nashville based multi-instrumentalist performer, composer, arranger, and private lesson instructor. Hailing originally from Milwaukee, WI, she earned her Bachelor’s of Arts Degree in Music on saxophone from UW-Milwaukee. She went on to continue her musical career and education with both Curt Hanrahan (Saxophone instructor), Stas Venglevski (Accordion Instructor), and Greg Drust (Record Archivist/Radio DJ)

In 2013, Mary won the Wisconsin Area Music Industry Award (WAMI) for "Reed/Brass Player of the Year." During this time she was a multi-instrumentalist (Saxophone, Flute, Accordion, Piano, Vocal) for the Milwaukee based circus/variety show "The Dead Man's Carnival". She also played Baritone Sax with the 40's RnB style group "The Uptown Savages" with which she released the 2014 album "Rock & Roll With You".

Mary Rodgers released her own full-length album called "To The Ghost of Mary Rodgers…” in 2019. This 15 track album, containing both vocal and instrumental tunes, was written and arranged by Mary. She brings her unique blend of Circus, Blues, Jazz, and early RnB to life with an array of horns, vibraphone, and creative auxiliary instruments. The album is available on Itunes, Amazon Music, Youtube, Pandora, Spotify, Deezer, Tik Tok and most streaming platforms. Keep an eye out for new releases and tour dates!