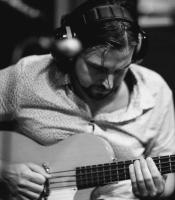 Originally from Arkansas but now a resident of Nashville, Michael Rinne has played bass for some of the finest songwriters and musicians in the world. His list of studio credits include Jack White, Alicia Keys, Willie Nelson, Rodney Crowell, Caitlin Rose, Ronnie Milsap, Andrew Combs, Rayland Baxter, Jesse Baylin, Lindi Ortega, Steelism, and the list goes on.  In recent years, he has been more in demand as a producer working with inspiring artists such as Kelsey Waldon, Caroline Spence, Erin Rae, and Kristina Murray.

In 2015 he took a break from the studio and travelled to over eight countries with Emmylou Harris and Rodney Crowell in support of their Grammy Nominated album The Traveling Kind. For the past two Decembers you might have seen Michael in concert with violin virtuoso Mark O'Connor playing in his Appalachian Christmas tours. In 2017 Michael joined multi-platinum grammy award winning recording artist Miranda Lambert’s band. In addition to performing all over the world with Miranda, Michael has made several television appearances and has also toured with the Pistol Annies.

Michael performed on the soundtrack Hank Williams biopic I Saw The Light which came out in 2016 on Sony Pictures Classics which was also his silver screen debut as he was cast in the film in the role of Lum York, bass player for the legendary Drifting Cowboys.