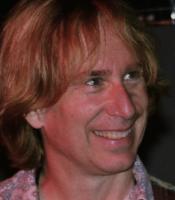 Patterson Barrett moved to Austin shortly after appearing on Jerry Jeff Walker’s eponymous first release on MCA records, playing pedal steel, dobro, and guitar (including pedal steel on the song “L.A. Freeway”). Not long after arriving in Austin, he formed the band Partners In Crime, which included Buddy and Julie Miller, releasing one album on his own label, Criminal Records.

In the years since, Patterson produced some of Hal Ketchum’s early demos, served in Al Kooper’s back-up band, accompanied Nancy Griffith on "Austin City Limits," and performed before 10,000 festival-goers as Chuck Berry’s pianist. He has appeared on several Buddy Miller recording projects, including the 2014 Buddy and Jim release on New West Records.

On a personal note:

These days I split my time between Nashville, Austin, Florida and the road.

am a fast learner

love to travel (passport good through 2024)

say no to drugs (a celebratory drink on rare occasions)

am happily married with 2 grown children