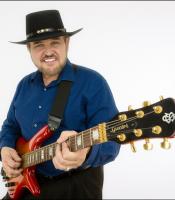 ARTIST: I’ve been in the industry nearly 50 years, 39 of which has been with Kenny Rogers. Who said I couldn’t hold a job?

COMPOSER & ARRANGER: As a composer and arranger I can help you write the music for your melody and/or lyrics

PRODUCER: I’ve had the good fortune of producing Singer/Songwriters, Artists, and Independent Artists. As you would expect I’ve had Kenny Rogers in my studio.

ENGINEER: This is where the fun begins, after we have the arrangement solidified and the charts written we get to go into the studio and begin the process of recording your song

Guitarist for Kenny Rogers since 1977 to current.  I am the official Meet & Greet photographer for Kenny as well as tour photographer.

My photographic journey began when I was given an Olympus Camera by my boss and mentor Kenny Rogers. I had been interested in photography for a while and had been helping Kenny with his various shoots. We'd shoot during the day fly out to do a show then fly back to his farm in Georgia. That night we'd developed the film shot earlier that afternoon. I learned a great deal in those late night dark room sessions. I thank Kenny for introducing me to the world of photography.

My goal now is to capture the essence of people, places and things in the most simple and creative way possible, paying attention to the quality of light, motion, emotion, composition, texture, color, form, beauty, meaning, and the inevitable, unpredictable magic of the moment...

Own and operate my current recording studio and photography studio. Producing artists and young talent. Record their songs for CD release or demos to be pitched. Photo shoots for entertainers: Head-shots, Promos, CD’s, Posters, etc.

Guitarist for The Headliners Goodlettsville TN 1975-1977

Perform with the show band The Headliners in our own club in Goodlettsville, TN