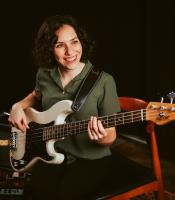 I frequently refer to myself as a professional song learner. Whether that’s for a live performance or for creating in the studio, I always try to bring an authentic, communicative perspective to the music.

Ryan Madora is a Nashville-based producer, writer, educator, and bass player. Recently on the road with artists including Robben Ford, Allison Russell, and Molly Tuttle, she’s a highly sought-after session player and musical director. Since moving to Nashville in 2012, she has backed artists including Brooks and Dunn, Hanson, Carrie Underwood, Darius Rucker, and Garth Brooks and has appeared on three episodes of the TV show “Nashville.”

Bringing eclecticism, groove, and musical intention to every gig, she is frequently called upon in the studio and can be heard on records with Robben Ford, Lamont Dozier, Kyshona Armstrong, and her own instrumental trio, The Interludes.

An educator at heart, Ryan teaches privately and contributes monthly columns to Bass Player Magazine and No Treble. In 2019, she published her first book, Bass Players To Know: Learning From The Greats and launched a learning channel with TrueFire.