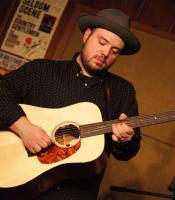 I'm a guitar player/singer/songwriter in the traditional country/bluegrass/blues/acoustic vein of music.  I'm also a session guitar player and a performing singer/player.

Keeping true to the roots of country music is not only a lovely sentiment of nostalgia, but a necessity for the growth of an artist…and staying true to the roots just comes naturally for Trey Hensley. After picking up a guitar at the age of 10, he quickly took the bluegrass world by storm —even performing on the Grand Ole Opry when he was 11. Through the years, Trey has had the opportunity to perform with the likes of Marty Stuart, Earl Scruggs, Johnny and June Carter Cash, Taj Mahal, Tommy Emmanuel, Vince Gill, Charlie Daniels, Steve Wariner, The Oak Ridge Boys, Ricky Skaggs, Blue Highway, J.D. Crowe and many others and Trey has opened shows for Marty Stuart, President George W. Bush, Former First Lady Laura Bush, Dick Cheney, Charlie Daniels, Peter Frampton, Alabama front-man Randy Owen, Sara Evans and others.

In the Fall of 2012, Trey had the opportunity to sing a “scratch vocal” on a song in the studio for legendary Bluegrass super group Blue Highway. The group ended up liking the vocal so much that they left Trey’s vocal on the finished product. The album, titled “The Game”, was released January, 2014 with Trey Hensley as a special guest on the song ‘My Last Day in the Mine’. In reference to Trey’s vocal on the song, Tim Stafford of Blue Highway said,

“It’s one take, live from the control room. That tells you how good this guy is!”

In the Summer of 2013, Trey relocated to Nashville, TN and started playing on a regular basis with IBMA’s 15-time “Dobro Player of the Year”, Rob Ickes. In the Fall of 2013, Trey and Rob decided to go work on an a duo album together. The outcomes of those recording sessions have turned into a new album, titled “Before the Sun Goes Down” due for release in January 2015. The duo has recently been signed to Compass Records in Nashville, TN and will start working on the second album sometime in 2015. “Before the Sun Goes Down” features new material from Trey, Bobby Starnes and Barry Ricks as well as a few standard covers and several more obscure covers from artists as diverse as Jimmy Martin, Merle Haggard and Bob Wills to Stevie Ray Vaughan.

“I first met Trey Hensley at a concert in East Tennessee when his guitar was almost bigger than he was. He played me his version of “Jimmy Brown the Newsboy” by the Carter Family that night and I instantly became his fan. As a musician, singer and songwriter, I’ve watched him evolve since that first meeting, but the one thing that has never changed is Trey’s authenticity. It’s one of his God-given virtues. In the ever changing world of country music, it’s comforting to know that the real deal still exists. I’m counting on Trey to keep the voice of the mountains alive because mountain boys always have something to say that’s worthy of a listen.”

Gene Parsons said this about Trey: