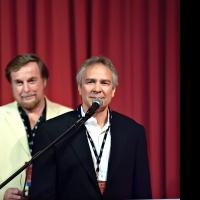 Tommy Malone "All Dressed Up"

I enjoy many styles and always appreciate the chance to study subtleties of an artist, piece of music, or event, but the most pleasant surprises in music overwhelmingly occur by chance and are completely about the moment. Thank God!

The photo above was taken on May 27, 2010, when I was honored with The Peavey Award from Hartley Peavey and MS Governor Haley Barbour at The Hard Rock Casino in Biloxi, MS. This came as quite a surprise to me, and was presented for my services the last 4 years as Drummer and Musical Director of “Mississippi — The Birthplace of America’s Music Celebrates Its GRAMMY® Legacy”. Mississippi is the only state to have been sanctioned the Grammy name for such an event, after NARAS found that it had more Grammy recipients than any other state, per capita. This assignment has brought me full circle to my roots in MS, from playing clubs, festivals and studios with the likes of George Jackson, Bobby Rush, John Lee Hooker and Rufus Thomas, to this honor of sharing not only the stage but an esteemed award with such amazing artists as Mavis Staples, Charley Pride, Dorothy Moore, BB King, Paul Overstreet, Benjamin Wright, Cassandra Wilson, Brandy, Marty Stuart, Jerry Lee Lewis, and many others. To say the least, I am very humbled. I tell you this to emphasize the fact that I am very proud of my MS heritage, as so eloquently sung by Mac McAnally in his song, "Back Where I Come From," at this year's show. I believe being raised in Mississippi had a huge impact on my drumming and musicianship, and I wouldn't realize the importance of it until much later. Jackson, MS sits in the middle of the triangle formed between the cities of Memphis, Muscle Shoals, and New Orleans. The timing of my experience there was the 60's & early 70's. I lived in New York City from 1976 through 1982 and quickly learned to appreciate much more diversity in music and approach. Of course there was some very cool music emerging from the city during that time, some of which may have been above my head but was not out of my reach, and it opened my eyes to the sheer preparation involved in producing and publishing any kind of music for LP, radio, TV, stage or theater. I was there for The Barranco Brothers Band, with my brother Johnny, but also was contracted for many jingles and songs and had the privilege of knowing and working with some of the world's greatest musicians such as David Sanborn, Elliot Randall, Will Lee, Lou Marini, Joe Beck, Lester Chambers, Tom Barney, James & Alex Taylor, Jeff Golub, Brian Alsop, Neil Jason, Peter Tork, Lester Chambers and many others who I still consider friends. Now, having lived in Nashville for over 20 years, I can say that it seems to split the difference between my deeper southern roots and NYC, and makes no compromises with anything musical. I am constantly amazed at the number of musicians and artists of all genres who frequent this town's stages & studios. Since residing here, I've had the pleasure of working with many great musicians and artists such as Mark Gray, Dee Murray, Ron Oates, Larry Byrom, Baillie & The Boys, Marie Osmond, Orleans, Skip Battin & Gene Parsons of The Byrds, Teddy Gentry, David Ball, David Lee Murphy, Joan Rivers (!), Bobby Jones Gospel, Billy Dean, Jo-El Sonnier, Wayne Carson, Larry Knechtel, and countless others with whom I have shared much joy, and learned great lessons over the years. I give thanks and all glory to God for the special gift of music. I appreciate my affiliation with The Nashville Musicians Association and can recommend membership to any serious musician working in the region.